"Exhaling is really cool, not worrying about what everyone is thinking about you."

After 60 years, Donna knows how to be grateful for age.

“Grandmas should show their wisdom in their face: the lines from crying, laughing, surprise, heartbreak…Those lines are there for a reason!”

We met Donna last week, now you can watch her full story and hear how she began to enjoy aging in this new video.

Did you miss Donna's first video? Watch it here.

When I ask children, this is my favorite thing to do, if you could have time machine, would you like to go forwards, or backwards? Where would you wanna go?

You know, I remember Joan Rivers years ago said something about, you know, before we're married and when we're younger, we're constantly sucking it in, and holding our breath, and trying to look great for all the guys, and all the women, and all of our...we just wanna look so great.

And when you finally reach that age when you can exhale, I never really understood it. Exhaling is really cool, not worrying about what everyone is thinking about you.

I am that woman who will tell everyone my age, I don't hide it. I earned everyone of these lines. There's been a lot of laughter in my life, which is why I've got all these crow's feet, and tears.

You know, it's been a good mix, but I'm so grateful to be 63. I've lost some friends along the way who didn't get to be 63. I realize now what's important, you know, growing up, Jewish family, my mother was always, "As long as you have your health."

My husband and I recently started cutting out sugar, cutting out wheat, cutting out dairy. We've been doing it for 60 days, and I have to tell you I feel so good. 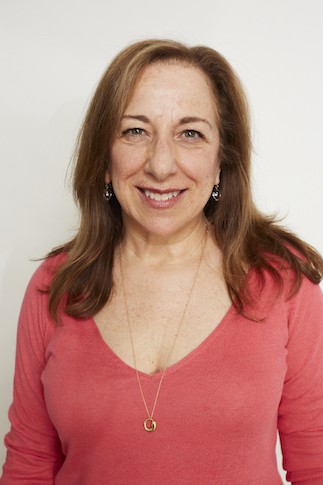 You know, since we've been doing this, people have said things about my skin, and about my eyes, and asked me if I've had work done to my face, which is just so funny.

You know, as you get older, you look back at photo albums and back at pictures of yourself, and you remember the insecurities when you were 25, when you were 35, when you had your 40th surprise party, and you look at those pictures, and say, "God, why did I think that I was too fat then?

Why did I think that my face didn't look good then?" So now, here I am with a little bit more weight, and a lot more lines, and I don't know what I was so worried about. I like what I see, I do. I like what I see. I like the lines.

And as long as my skin is healthy, then I'm good.

So I was running late, I'm always running late. Got out of the shower, put on the moisturizer, which was really yummy, and I looked at all of the things, there was like, glow stick, I didn't know really what I was doing.

But I used my instincts, I did the cheek color, and on my lip, and then I took the glimmery one, and I did my sort of orbitals, and my nose, and my chin, and I just walked...I put a little mascara on and I walked out of the door.

So I met my friend who...we're friends since we were two years old, so she's kind of like my sister, we were having mani-pedis yesterdays, and I walked into the shop to see her, and she was like, "Your skin looks so good. What did you do?"

And I told her the whole story, and she was like, "I have to say...I don't like to say this to you, but your skin usually looks very dry, and today you're glowing." So that really is a true story, seriously.

When I was younger, I had an aunt, she was a very, very close friend of my family, so they called her aunt. Very, very wealthy, beautiful, and very vain.

And I remember a conversation that I overheard where she said to my mother, "When are you gonna get Donna's nose fixed?" Sorry.

So being a teenager, and going through all that, and overhearing that, it was the last thing on my mind. I asked my parents if they could do it, my parents didn't have a lot of money, and they said, "You know what, if this is something that you want, we will save that money and we will get your nose fixed."

So what I wanna say is that my theory is, for the women that were born with those perfect noses and perfect teeth, I think aging is really hard.

I think that those women who were always told they were so beautiful and the women that weren't told that they had to have their noses fixed have something...a standard that they have to maintain.

So for me, aging is making me more comfortable. I feel like everything is just falling into the right place.

I know in Asian cultures, those women and men with all of those beautiful lines are the people that are respected more. Grandmas should look like grandmas.

Grandmas should show their wisdom in their face, the lines, the lines, you know, from crying, from laughing, from surprise, from heartbreak.

You know, those lines are there for a reason. And I would hate to see a world where nobody has those lines anymore.