10 Silver-Hair Stories in Their Own Words 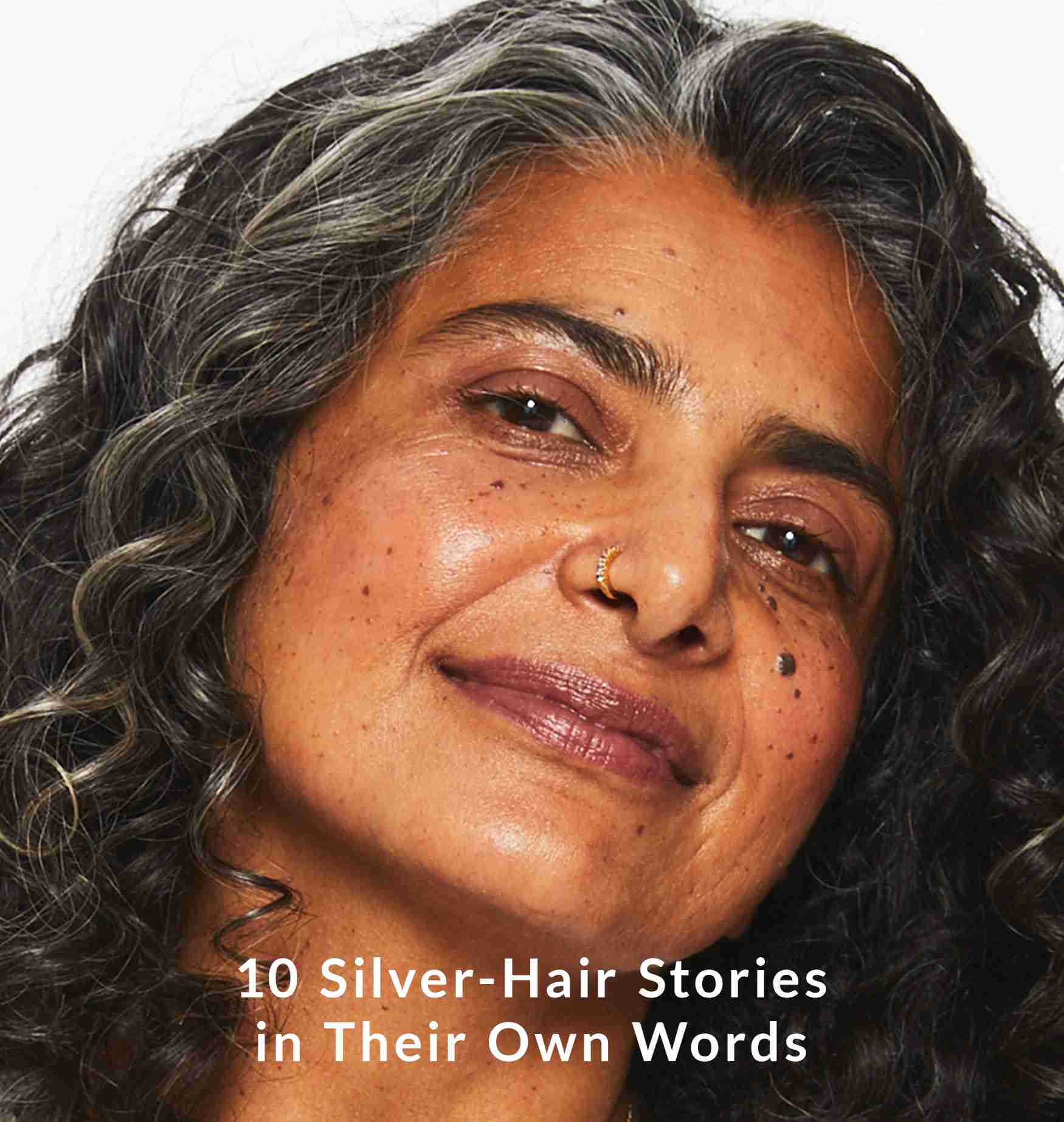 A few months back, we asked our readers to share their personal journey of transitioning their hair to silver, snow, pearl, pewter, salt-and-pepper and other gorgeous natural colors.

And Boom readers did not disappoint.

Over 100 stories came flooding in from Boom women of all ages and at all different stages of their silver-hair transformations. It was beyond inspirational to see.

Today, we’re sharing a few silver-hair stories from these incredible women—in their own words. Read on to hear (and see!) what these women discovered when they started embracing their own natural color.

“If only my Mother could see me now.” 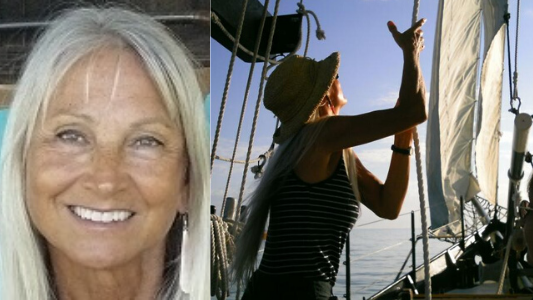 “Hello, I would like to start by saying THANK YOU for giving all these silver beauties a voice and the acknowledgment to our society that aging is a privilege, and we can do it gracefully without feeling like we are being judged and criticized for not being part of the YOUNGER generation. Frankly I wouldn't go back!

“My story is similar to many others. I was born during the Shirley Temple era when all mothers wanted the little girls to have a head full of curly locks! Well... I was born with no hair. When I finally had hair, it was so straight and fine, there was no way it was going to curl. So my Mother tolerated my straight hair, always wishing it was curly, and meanwhile giving me a complex about my ‘terrible’ hair! Well, one day she decided to give me the ’Home Perm!’ YIKES! I have my share of ’BAD HAIR’ grammar school pictures.

“Fast forward to teenage years when long, straight hair was the ‘IN’ thing. I was finally in the groove… well, almost. The problem seemed to be that my hair was ‘TOO FINE and TOO THIN.’ And suddenly I had reached the age of being ‘HOMELY.’ So I was 15, convinced I had bad—no, terrible—hair and I was homely! Then, I had the worst thing that could happen in my life. My mother lost her battle with cancer. I was 16, alone and very self-conscious.

“Fast forward through many years of more perms and eventually color and knowing that I was homely because my mother died before she could tell me that I wasn't homely anymore. One day I decided it was time to stop. I was about 48 and weary of the whole routine. When I told my hair stylist that I wanted him to take out the color and there would be NO MORE PERMS, HE GAVE ME A BIG GRIN AND A BEAR HUG!

“It took about six months of treatments to remove all the color, and when he finally achieved my natural color, it was a beautiful, gleaming silver! It is still fine, straight, long... but much fuller. And, like many of the others, I receive compliments all the time from all ages, male and female. And now, all I do is get it trimmed every now and then. I have had others tell me that I have been an influence on them to do the same. If only my mother could see me now… Cheers!”—Leanne L.

“15 years of curly grays and loving it.” 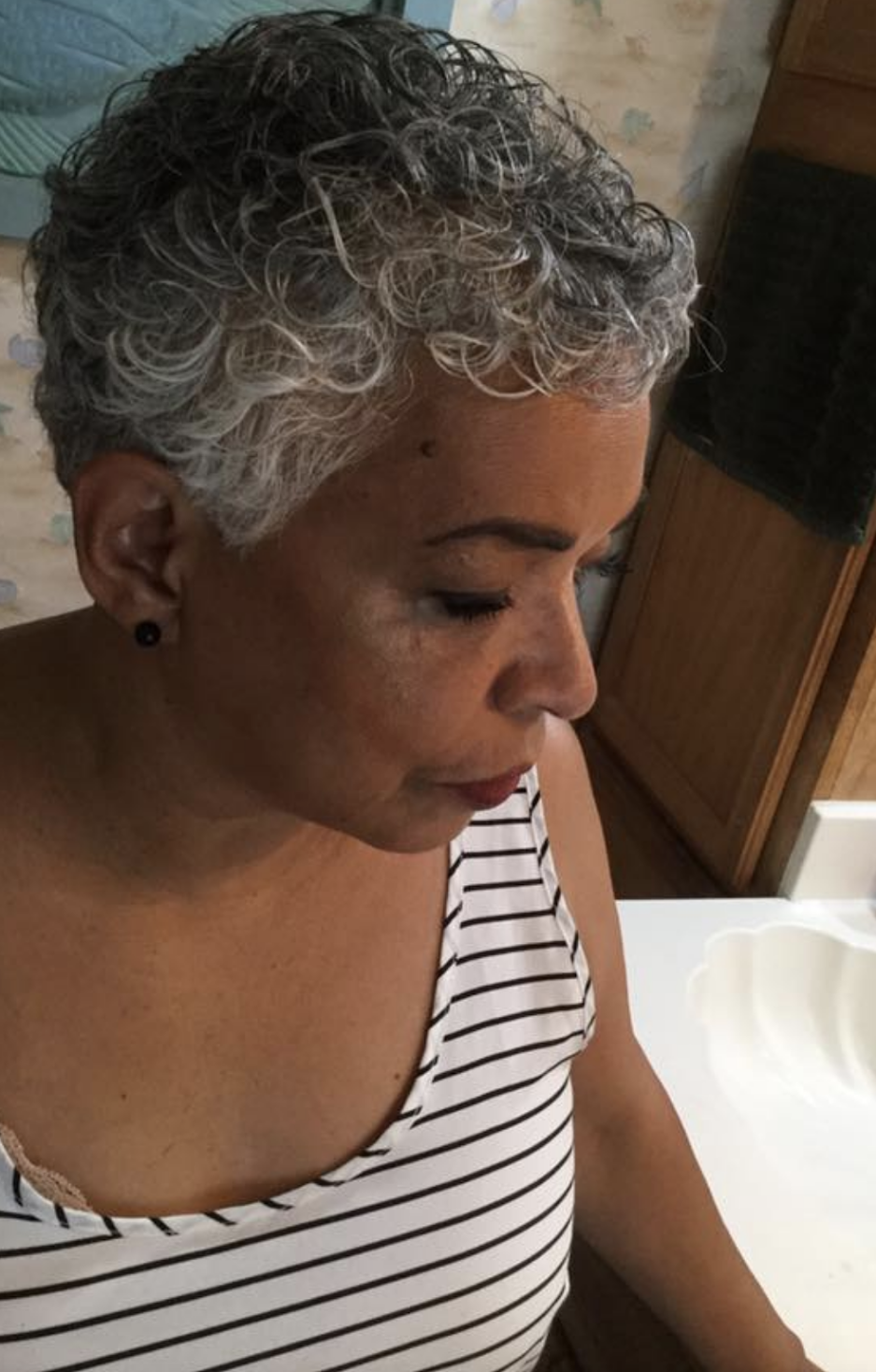 “15 years of curly grays and loving it. I get many more compliments now than when I had curly dark brown.”—Judith R.

“Love the freedom and authenticity. More than that,
I love the color.” 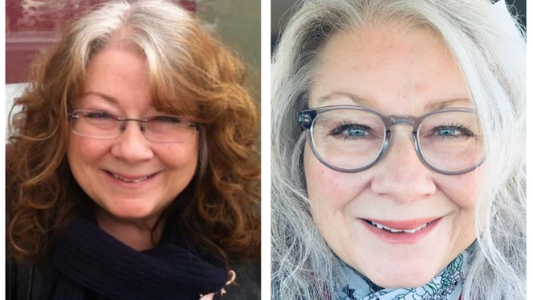 “It all began in 2012 and our Silver Sister Facebook group met in New York City. Cindy Joseph was a featured speaker and brought samples of Boomsticks. I’ve used these ever since. My hair transition took 21 months with just regular trims. Love the freedom and authenticity. More than that, I love the color. It suits me more.” ❤️—

“I get compliments from men of all ages, including
a man 17 years younger.” 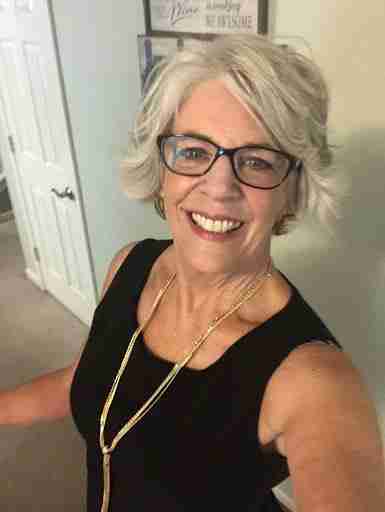 “I'll be 68 in January. I decided to stop coloring my hair about five years ago. I had my hairdresser cut my hair and highlight it champagne blond, then let it grow out.

“I love it and I get compliments all the time—from strangers on the street to women in the salon where I get my hair cut to co-workers and men of all ages—including a man 17 years younger than me who says he was attracted to me because of my hair.

“I love not worrying about roots or paying for color! I also love Boom. I've been using Boomsilk for years, as well as Boomstick Color and Boomstick Glimmer. Those three and some mascara, and I'm ready for the day!”—Sally R.

“I was pleasantly surprised that my hair was completely white—or as I call it, ‘platinum blond.’" 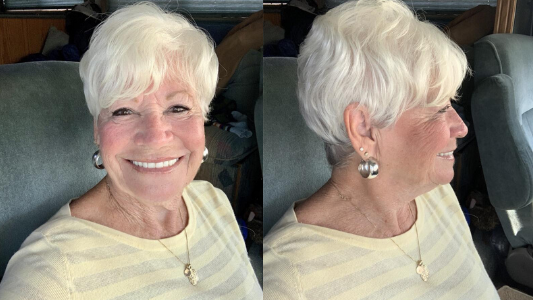 “I am 74 and have been using Boomsticks for a couple of years now. I threw away the mountains of eyeshadows, blush, etc. and only use your products. I dyed my hair blond for years and although I loved it, my hair was beginning to turn white, and it really showed in the regrowth every two weeks. I decided to just let nature do its thing, and when I was fully transitioned, I was pleasantly surprised that my hair was completely white—or as I call it, ‘platinum blond.’—Chicklett

“My silver hair began to appear at 25. That was the
turning point for me.” 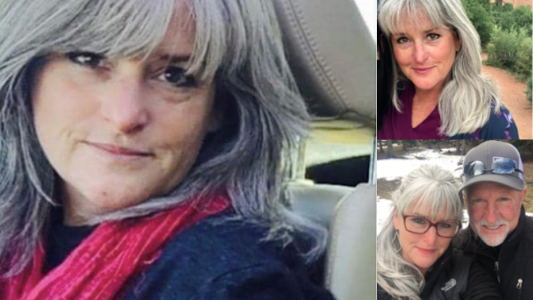 “My silver hair began to appear prematurely when I was about 25. By that time, I had more silver strands than I could pull. That was the turning point for me. It seemed that my options were to start coloring my hair or accept the change. Since I was a single school teacher with little discretionary money and even less motivation to go to a hairstylist on a regular basis, I decided to embrace the transformation. I considered the idea of coloring my hair once the silver showed up in photographs, but by then I was a mother with two young children and way too busy to start any high-maintenance routine.

“People's reaction to my hair sometimes surprises me. Initially, I had a prominent silver streak. Several strangers asked if I had been struck on the head or had a ‘God’ experience. I laughed as I imagined the TV movie The Ten Commandments where Moses came down from the mountain. As I've gotten older, the comments are simple compliments from women admiring my hair. My son, who's in his early 20s, thinks it's weird when strangers approach me. I elbow him and giggle every time it happens. I love my salt-and-pepper hair and consider myself blessed with good hair genes. Mom just turned 90 and still has a full head of hair. My husband, who's 14 years older, thinks I'm beautiful.

“We live in a society where the idea of aging, especially for women, carries such a negative connotation. I believe that we, as women, should embrace one another and celebrate who we are. Cindy Joseph's company and products are such a wonderful representation of that mindset, which is why I'm a faithful customer!”—Linda N.

“I get so many compliments from people who say they pay for my hair color." 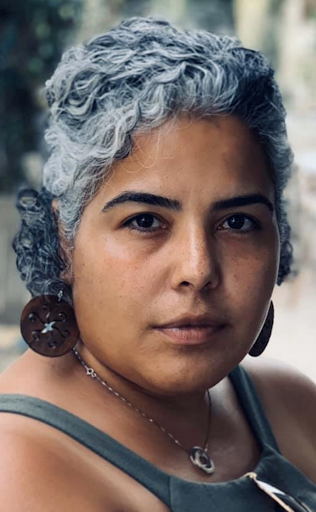 “I’ve been graying since 17. I’m now 35 and have gone three years without coloring my hair. It’s freeing, and I’m embracing it. I get so many compliments and people who say they would pay for my hair color.”—Yesenia P.

“I took a vow to never dye my hair again. I made a decision to embrace the silver.” 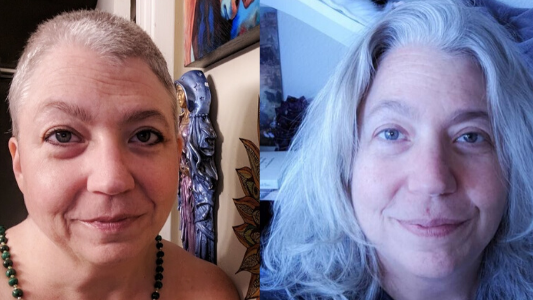 “I spent years dying my hair, until it became fragile and straw-like. I shaved it all off during a severe depression and when menopause hit me in 2018. I took myself off antidepressants and shaved my head. I took a vow to never dye my hair again, nor would I use any chemicals. I made a decision to embrace my silver hair and hot flashes.

“My hair came back as this brilliant silver, and I have gotten so many compliments and I have encouraged many other women to leave their hair alone as well. I am 51 and I began going silver at 21. No more dye for me. Here are some timeline pics. I love my hair and I am grateful it grew back after shaving it off in 2018.”—Michelle D.

“I am canceling out all negative self-talk. I am going to shine, ladies!” 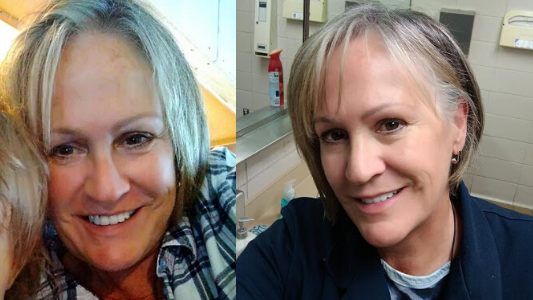 “I fell in and out of love with my silver hair for about 20 years. I am 59, turning 60 on New Years Eve! After I saw Cindy on Facebook, I was stunned by her beauty and her pro-age mindset. I didn't have the courage to just let my dark brown hair grow out naturally, but I found a hair stylist that helped me ‘baby step.’ It has taken almost a year and a half, but I am almost there!

“I have promised myself that 60 is going to be my year to shine! I am going for seven days hiking in Utah in 2020 (one of my life dreams!). I am going on a vacation with my husband. (The last one was 20 years ago!)

“I am canceling out all negative self-talk. I am going to shine, ladies! My dream these days is to be an encouragement and a good role model to all women who are struggling with the process of embracing the years ahead of them.”—Chels

“I am forever grateful to Cindy for blazing this trail.” 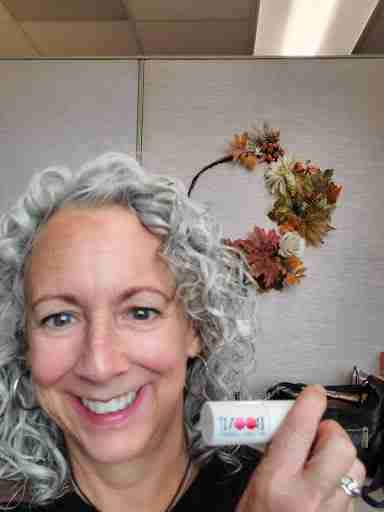 “I made the decision to stop coloring my hair about three years ago when gray hair became the new fashion.

“I love the low maintenance, and there is never a week that goes by that someone doesn't stop me in a store to comment on my hair. Men, women, teens... the compliments always tend to come at a low point. There are always those days (or weeks) when I look in the mirror and see a gray-haired hag and wonder how I let this happen. But doesn't everybody feel down on themselves sometimes?

“About this same time, my favorite mineral powder, that I've used for years, was not looking good on my skin anymore, so I went on a three-month search for a liquid foundation. I exhausted myself trying to find something and came across an ad for Boom. I immediately ordered the Trio and was so excited when my order arrived. It took me several days to figure out how much to apply and where. Then I was in love, and my morning routine has been so easy ever since. I have been using Boom for about three years now with a little mascara and feel like my skin looks better than ever.

“I am 54 years old and love my low-maintenance gray hair and my Boom. And get more compliments than I ever have in my life. I love you guys! I will forever be grateful to Cindy for blazing this trail.”—Debby D.

Please join us in thanking these inspiring women by leaving a comment below. Tell us what you think of their stories and all-natural hair.

Also, we’ll be sharing more stories like this soon! So if you have a story to share, please drop it in the comments!